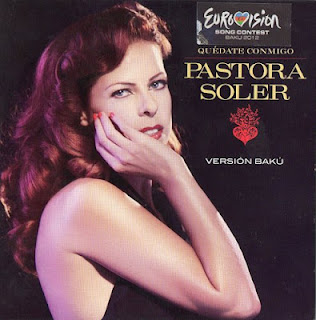 Pastora Soler (Pilar Sánchez Luque) was chosen represent Spain in the 2012 contest with the song Quédate Conmigo (Stay with me).
TVE chose the Sevillan singer internally, but the entry was selected in a preselection show.

The song is written by Thomas G:son, Tony Sánchez-Ohlsson and Erik Bernholm.
You can still listen to all for songs here at RTVE or at Pastora's YouTube channel.

The song was selected in a NF with thee songs. One of the three was selected in an internet voting with two songs.
The songs straight to the Spanish final were:
Quédate Conmigo
Tu Vida Es Tu Vida *
The two song for the web pre-selection were:
Ahora O Nunca (to the final)
Me Despido De Ti *
* These songs can already be found on Pastorás latest album in different versions (see below). 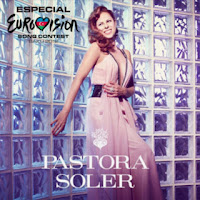 Eurovision Especial EP: All four songs for the NF are now available in their Eurovision versions at iTunes Spain.
A 1-track promo of Quédate Conmigo is issued by Warner Music Spain.

Stay With Me
July 24 sees the release of the long awaited English version of Quédate Conmigo titled Stay With Me.
The track will be released through the main digital platforms. You can watch an introduction video here at Pastora's Youtube channel. 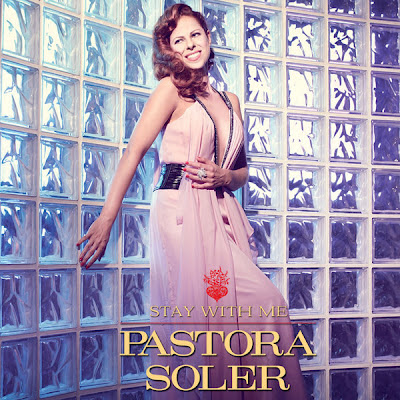 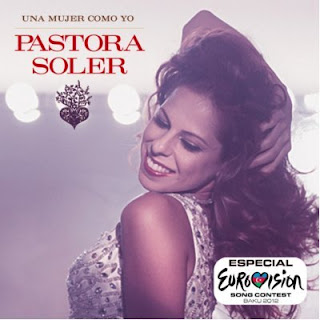 A new edition of the Una Mujer Como Yo CD is released on March 27. It includes the original 12 tracks plus Eurovision entry Quédate Conmigo, Ahora O Nunca and a new remix of Tu Vida Es Tu Vida. 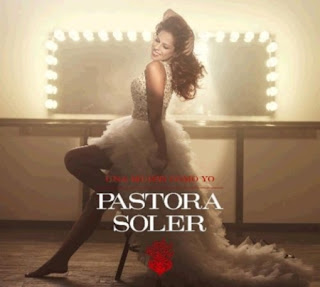 Since 1994 Pastora Soler released ten albums and a compilation CD.

Her most recent release is Una Mujer Como Yo (A woman like me) which was released October 2011.
The album reached # 3 on the Spanish album charts
Her copla / flameco flavoured earlier work has made way for a more pop-ballad style over the years.

The Songsmiths:
Thomas G:son (Thomas Gustafsson) is a prolific Eurovision songwriter. He (co-) wrote many songs for prelections in Sweden, Norway and Spain And also some for Romania, Finland, Denmark, Latvia, Poland and Belgium.
His Eurovision entries are:
Sweden 2001 - Listen To Your Heartbeat - Friends
- written with Henrik Sethsson, 5th place
Sweden 2006 - Invincible - Carola
- written with Carola Häggkvist, Henrik Wickström and Bobby Ljunggren, 5th place
Spain 2007 - I Love You Mi Vida - D'Nash
- written with Andreas Rickstrand, Tony Sanchez-Ohlsson and Rebeca, 20th place.
Norway 2007 - Ven A Bailar Conmigo - Guri Schanke
- 18th in semi
Denmark 2010 - In A Moment Like This - Chanée and N'Evergreen
- written with Henrik Sethsson and Erik Bernholm, 4th place.
Spain 2012 - Quédate Conmigo - Pastora Soler
- Wiritten with Tony Sánchez-Ohlsson and Erik Bernholm, 10th place
Sweden 2012 - Euphoria - Loreen
- written with Peter Boström, winner of Eurovision 2012
Tony Sánchez-Ohlsson has (co) written many songs for the Spanish selections including the above mentioned I Love You Mi Vida (2007)
Erik Bernholm co-write the Danish entry In A Moment Like This and Something In Your Eyes for Jenny Silver (Melodifestivalen 2011)

World Wide Coverversion
A wonderful coverversion of Quédate Conmigo is made by singers from all over the world. (well mostly Eurovision countries although some are from beyond Eurovision land. (Canada, South Africa) There are some pre-selection singers there you may recognise.  Check out more details and the stunning video here.

Frontpage
Posted by Eurocovers at 1:28 AM