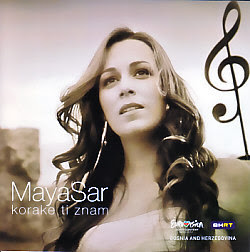 BHRT have chosen singer-songwriter Maya Sar (Maja Sarihodžić) to represent the country at the 2012 Eurovision Song Contest.
The song is Korake Ti Znam written by Maya Sar herself with arrangements by Maya's husband Mahir Sarihodžić and Adriano Pennino.

You can download the song and the video here at BHRT.
It's not the first time for Maya Sar on the Eurovision stage: She was one of the singers in Dino Merlins entourage in 2011 and she also appeared as a backing singer in 2004 with Deen.
Korake Ti Znam: has also been released through digital sources like Amazon and Itunes.

An English version is recorded. Listen to The Steps I Know at Maya's Youtube channel.
Maya has also recorded an Italian version. You can listen to I Passi Che Fai here at the tube. 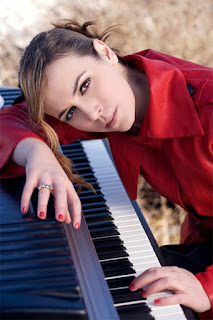 Maya has released a few singles of which the first Nespretno was a popular hit in the region. She has been working on her debut album with her husband Mahirom Sarihodzicem.
Maya also recorded Moj Život Je Moja Pjesma (My life, My song) with Nina Badrić, Aleksandra Radović and Karolina Gočeva in 2010. The charity song is aimed to promote cancer awareness.

Thanks to Jean-François
Posted by Eurocovers at 1:26 AM