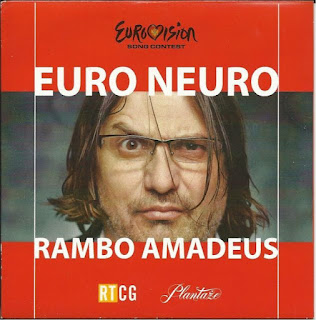 RTCG (Montenegro TV) chose Rambo Amadeus World Kilo Tsar (Рамбо Амадеус) to represent the country in the 2012 contest. It means that the country decided to return after a two year absence.

The song is Euro-Neuro. It's in English and RAWKT doesn't sing but talks his way through the song.

A 1-track cdsingle and a cd/DVD set were issued from promotion in Baku. 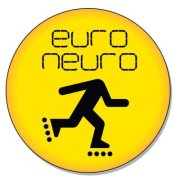 RAWKT has lent his services to the international Brain Awareness Week (BAW).
The Serbian Neuroscience Society supported BAW 2012 with an exhibition and a concert on 14-3 featuring the man himself.
The song Euro-Neuro is linked to the topic of anxiety and neurosis. Read more about the event here.

Rambo Amadeus now going by the name Rambo Amadeus World Kilo Tsar but known to his family as Antonije Pušić is a Montenergo born singer songwriter now based in Belgrade, Serbia.
His eclectic style of satirical pop comes in musical flavours like rock, punk, funk and jazz.
The self proclaimed World Mega Tsar released 10 albums since his debut O Tugo Jesenja in 1988, the most recent being Hipishizik Metafizik  from 2008.
He also released several compilation and live albums.

The song for Baku is recorded in Slovenia with producer Magnifico (Robert Pešut).
Robert Pešut is probably best known to Eurofans for his popular son Silvija from the 1998 Slovenian selection. He also produced the album of Aviational Slovenian Eurovision Superstars Sestre (2002) 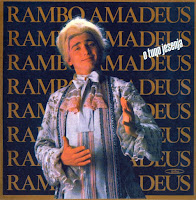 The 2012 entry will be the 4th participation for Montenegro (Црна Гора, Crna Gora) as an independent country.
In 2005 the song for Serbia-Montenegro was Zauvijek Moja by No Name, a song that was selected by Montenegro TV for the Serbia Montenegro final. No Name also won the 2006 national final, but the participation was withdrawn.
In the days of Yogoslavia in Eurovision only two songs chosen by Montenegro TV won the national final and went to Eurovision, Džuli by Daniel in 1983 and Ciao Amore by Vlado and Izolda in 1984.
Džuli, first rejected by Croatian TV ended 4th in the contest and became one of the biggest Eurovision hits of the era.

Montenegro in 2009 at the Moscow Collection - Andrea Demirovic
Posted by Eurocovers at 1:17 AM