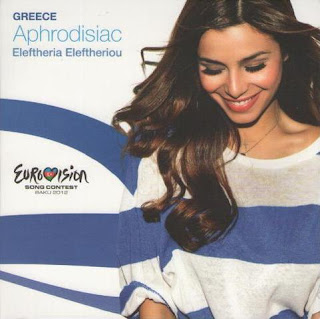 Eleftheria Eleftheriou was already lined up for the Greek selection in 2010 but was disqualified after her song Tables Are Turning / Kentro Tou Kosmou was leaked by a Eurovision website who were allegedly not keen on her participation. The premature airing of the song was against the rules of ERT's contest.
Eleftheria Eleftheriou nor her crew were responsible for the leak but the damage was done and she was out.
In 2006 she participated in the Cyprus national final together with Maria Zorli.
Their song Play That Melody For Me ended 7th.

A 1 track promo of Aphrodisiac is issued for Baku (Warner 7022113, top picture)
A cdsingle with all four tracks from the Greek national final has been issued by Universal (7001880).Shop for the single at BeaRecords or you can buy all four NF songs at digital outlets like Amazon. 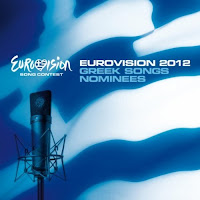 National Final
The national final of Greece had four songs this year, all selected by Universal.

links and sources
ERT
http://www.eleutheriou.com = links to her facebook only
Special thanks to Queens Park Rangers forum We Are The Rangers Boys