Soluna Samay won the Dansk Melodi Grand Prix 2012 with the song Should've Known Better.
The song was written by Remee, Chief 1 and Isam B. from Outlandish. (see below).
The winning song and its karaoke version are available on the Dansk Melodi Grand Prix 2012 CD (see below). You can watch the official video clip here at Soluna's Youtube channel.
Update: The official Baku CD has a slightly different version, best noticed after 2:27, when the backing vocals singing Shout inshallah from the DMGP version have disappeared.
The official karaoke release does have the backing vocals (whereas the DMGP CD version is instrumental)
At Eurovision a version with these backing vocals was performed.
- Special thanks to Roy for spotting! 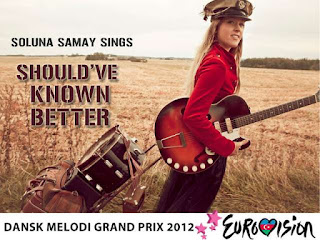 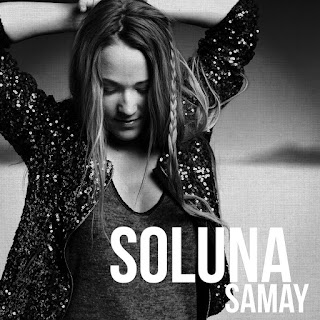 No cdsingle or promo has been released, it's the first Danish entry with no physical release whatsoever.
In July and August Soluna is extensively promoting her music through Sony in Germany.

Remixes:
I missed it, but it seems a remix competition was held to create a mix of the Danish entry. It was hosted by the composers hosted by Remee & Chief1
You can listen to the results here at soundcloud, some pretty good ones, sadly the best one (Lysholm remix) is only an edit, but most are full versions. No clue if anything will be released in any form though.
Others are by Nordberg and Severin, DJ Base, Tobias Rydahl and Headworx. 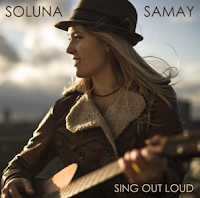 Soluna Samay was born in Guatamala from a Swiss mom and a German dad. Soluna  has been performing live for 15 years (she's 21 now) and her debut solo album Sing Out Loud was released in September 2011.The album also includes her single Two Seconds Ago. Releases are on Baltic Records. In 2003 Soluna released her first solo single I Wish I Was A Seagull (Ozella music) when she was 11 years old. 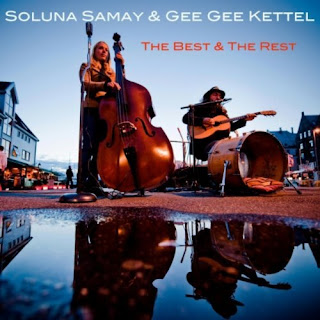 Before her solo album she released six albums with her father /one man band / street musician Gee Gee Kettel. These albums mostly include coverversions of 60's to 80's rock and folk classics in acoustic settings. The first Gee Gee (or GeGe) album Soluna can be heard on is Roadsongs from 1999 where she plays the drums and sings on one song.
The CD The Beat Goes On is the first album with all songs by Soluna and her pappa. Streetwise from 2009 is the last full album Soluna recorded with Gee Gee so far.

Update: A compilation album by Soluna and Gee Gee has been released. The Best And The Rest features tracks recorded from 2001 to 2011. The digital release is available through itunes and Amazon. (Chocolate Factory records) 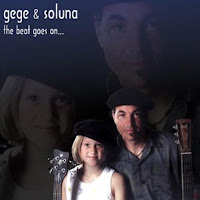 Most of the old Soluna and Gee Gee albums are available at the tunes, amazon or can be ordered through the Gee Gee Kettel website.Songs recorded by the duo over the years range from Bob Dylan's Subterranean Homesick Blues and Neil Youngs Heart Of Gold to Sade's Smooth Operator and Coldplay's In My Place.
Soluna traveled the world as a kid and performed in Europe, Africa, South America and Asia. The travelling family settled in Denmark in 2000 so Soluna could go to school. Soluna plays the drums and the bass.
There's a wonderful collection of old clips featuring Soluna at the Gee Gee Youtube channel. 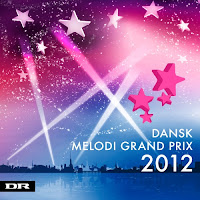 Denmark had a 9-song national final on januari 21. The CD with all songs and their karaoke versions is out now. (Frituna records / EMI 9558802)
DR now has all nine final songs available for listening here
A 10th song was disqualified, but it is included on the CD.
DMGP 2012 enters the Danish album charts at #4.

The composers:
Remee (Mikkel Sigvardt) is a well known Danish songwriter and producer. His C.V. includes top 10 hits for The Saturdays, S Club 7, Jamelia, Robyn, Darin, Monrose, Blue and many many more.
He co-write the German Eurovision entry Disappear for No Angels (with Hanne Sørvaag and Thomas Troelsen). Remee also was a judge on three seasons of the Danish X-factor.
f
Isam B. (Isam Bachiri) is a member of Outlandish, the rap outfit that had a European hit with their version of Cheb Khaled's Aïcha. B. also released two solo albums Institution in 2007 and 2200 Carmen in 2009.
Outlandish fooled around with one Eurovision classic: Kom Igen from the album Closer Than Veins (2005) uses a version of Danish 1963 Eurovision winner Dansevise (original: Grethe and Jørgen Ingmann) and the Outlandish boys (and guests) are happily rapping along to it in Danish, English, Spanish, Arabic and Urdu.
f
Chief 1 (Lars Pedersen) wrote produced and / or remixed songs for Ace Of Base, Bryan Rice, Michael Learns To Rock, Jennifer Paige, Patrik Isaksson, Sanne Salomonsen and many other artists.
He was a founder of Rockers By Choice, credited with being the first Danish rap band to perform on MTV in the 80's.

Also check out Denmarks recent entries.
2011 - A Friend In London
2010 - Chanee and N'Evergreen
2009 - Brinck
A remarkable number of worldwide coverversions have been recorded of the Danish 2009 and 2010 entries. You can find all the details if you follow the above links.