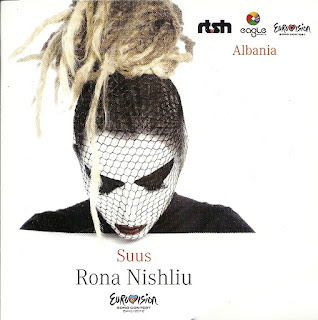 Rona Nishliu won the 50th Festivali I Këngës with the song Suus.
The song is the Eurovision entry for the contest in Baku and Rona scored the best result for Albania ever. The first entry in 2004 ended 7th.

The song was written by Florent Boshnjaku and Rona Nishliu herself.
Rona Nishliu is from Kosovo and is the first Kosovan singer to win the FIK.
Suus is Latin for It Is.


A new version of Suus has been recorded in Los Angeles in Captol records and Oceanway studios. The song was performed in Albanian at the contest.
Now listen to the new version here at the official Youtube channel.

A 1 track promo cd is issued, A DVD (top picture) has video clip, audio's (see below), photo's and bio's.

English Jazz Version
A new version of Suus can now be heard through this Youtube or Rona's Facebook.
The English version has a different arrangement from the original Albanian version.

2005
Rona Nishliu appeared in the FIK of 2005 with the song Flakaresh performed with Vesa Luma and Teuta Kurti. It reached the final but ended outside the top 3. (results remian undisclosed). In 2004 Rona ended top 5 in Albanian Idol.

Even though the country entered Eurovision for the first time in 2004, the FIK celebrates its 50th edition this year.


To celebrate this event there were four nights of FIK this year.
On 26 and 27 December there will be two semi finals with 14 songs each. Eight will go through the final.
On the 28th there wasa special night celebrating the festivals history

Albania has entered Eurovision eight times. Best place was 7th in their debut year 2004 with Anjezá Shahini's The Image Of You. Albania was in the Eurovision final five times.

Posted by Eurocovers at 1:29 AM