Belarus - We Are The Heroes - Litesound 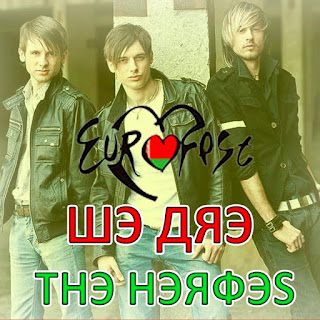 The song that Litesound sang in the Eurofest is We Are The Heroes, and it was confirmed it will be the Eurovision entry, even if a different entry seemed to have won the Eurofest National Final (see below)

A new, more dance tinged, version was recorded for Eurovision, which is already the third version of the song.
Listen to the new version here at Litesounds website.

All My Life by Alyona Lanskaya (Алёна Ланская) was originally announced as the winner of the 2012 Eurofest in the televisionshow, but it now is Litesound who will represent Belarus.
The updated page of BTRC doesn't mention Alonya Lanskaya as the original winner (or: it doen't mention her at all) so there is no official confirmation that the choice for Litesound is related to irregularities in the voting.


Download and Listen
Listen to the 2nd version of We Are The Heroes here at Litesounds MySpace or at Reverbnation. You can download the song with the widget below. (click the small arrow and you will get a fb option or an e-mail option to join and get two Litesound songs for free including We Are The Heroes.

Remixes
You can listen to remixes of We Are The Heroes here at the Litesound Fansite. A competition was held (I missed that) and the results are available to listen.
You can still download the audio tracks to make your own remix (page with Google translate)

Litesound have been participating in the Belorussian preselection on several occasions:
2006 - My Faith
2007 - Summer Trip
2008 - Do You Believe
2009 - Carry On (with Dakota)
Litesound is based around brothers Dmitry and Vladimir Karjakin (Дмитрий and Уладзімір Каракін a.k.a. Jay and Ronnie Blade) with Italian singer Jacopo Massa (Якопа Маса).
The other members are Alex Kolchin (Алекс Колчын) and Ignat Yakovich (Ігнат Яковіч).

You can listen to the studio version of the Alonya Lanskaya song All My Life here at VK.ru

On Valentines day Belarus chose their entry for Eurovision 2012. (... well they had their Eurofest selection)
Five artists were in the running, but it's not guaranteed that the (now, new) winning song will also be the Eurovision entry. Belarus have been known to change songs in the process on several occasions. It is the first time that they ditched and switched the artist though.

Posted by Eurocovers at 1:21 AM